by Larry Cooper | Apr 18, 2019 | BHN Supporting the Community, Fertilgold Products In Use | 0 comments 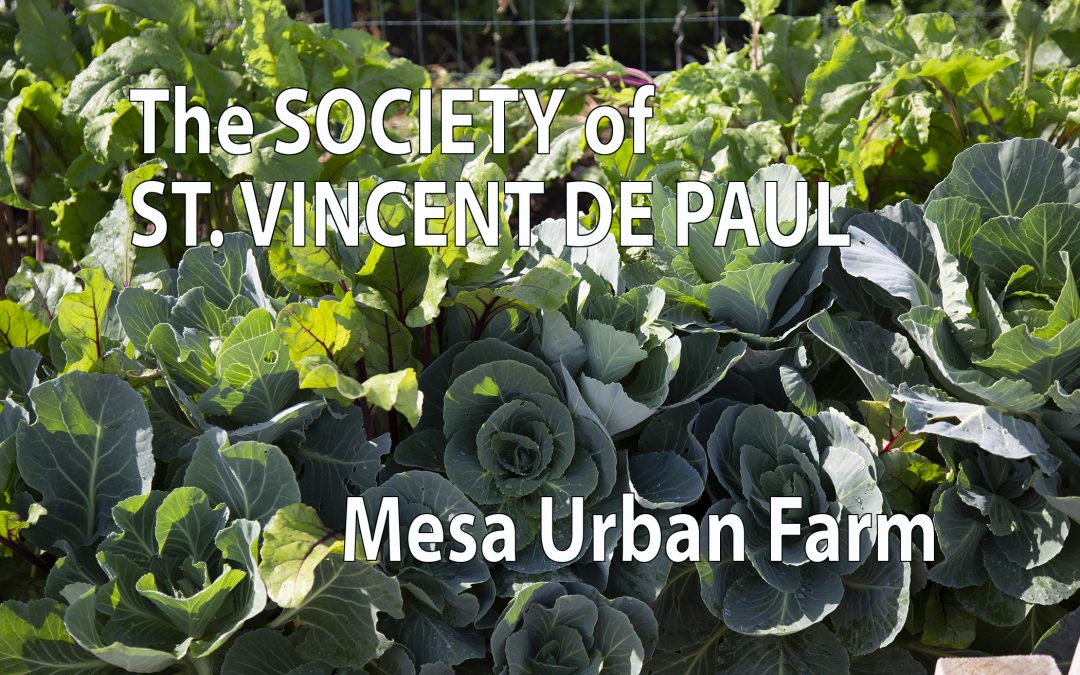 The Society of St. Vincent de Paul (SVDP)—with its mission of Feed, Clothe, House, Heal—does a lot of work for the poor and homeless in the Greater Phoenix area, and their many projects include several urban farms that are in proximity to their free dining rooms. As with most of their projects, their urban farms are mostly worked and managed by volunteers.

In 2016, the future site of the SVDP Mesa Urban Farm was a vacant lot next to a SVDP free dining room (there is no red tape at the dining rooms: If you are hungry, show up and you’ll be given a meal). Two of the dining room volunteers, Mary Ann Ricketts and Margot Jauregui (who later became Co-Coordinators for the project), wondered out loud one day if that vacant lot of compacted Arizona desert soil could be put to productive use for and by the dining room clientele. Before they knew it, a semi-truck load of compost was delivered to the site and the SVDP Mesa Urban Farm was born. They laid out a 50’ x 60’ border of railroad ties, filled the interior with a foot of compost, and began planting directly in the compost—hoping that over time the compost would help turn the sterile, sun-baked soil underneath into something hospitable to plants.

With assistance from other organizations such as church youth groups, the Boy Scouts of America, and the Walton Family Foundation, the SVDP Mesa Urban Farm was soon able to build a permanent shade structure to protect the garden plants from the brutal Arizona summer sun, garner essential gardening tools and tool storage, install a sprinkler system so that everything did not have to be hand watered, and purchase some essentials such as fertilizers and vegetable seeds and starts. A second, 30’ x 30’ garden was established in 2018. The group also acquired some client-volunteers from among the dining-room patrons, repaying their service with produce from the garden, work experience, social service contacts, and grocery-store gift cards. From the beginning, the SVDP Mesa Urban Farm was as much about helping the clientele as it was about growing produce. There is a growing list of former client-volunteers who now have full-time jobs, live in apartments, and have their lives back on track due to their Farm experience. The Farm does produce a lot of vegetables though; over 5,000 pounds of fresh vegetables were sent home with client families last year.

In early 2018, I began volunteering at the Mesa Urban Farm on Saturday mornings. An early project for me was to develop a system for composting garden and dining room waste back into the garden (yes, communications directors know a surprising amount about composting waste). The 4-bin composting system (see photos, below) is now producing 100+ wheelbarrows of compost a year, which all goes back into keeping the garden fertile.

Later in that year, the Farm had a whitefly infestation in its squash and pumpkin rows. “We have a solution for that,” I told the Coordinator. Back at work, I asked BHN CEO Lyndon Smith if we could donate some Huma Gro® Proud 3®. “Sure,” he said, “We love the work St. Vincent de Paul does. Take them over a case.” So we did, and their whitefly problem was solved.

(Article continues after the photo section.)

Click on any of the photos below to enlarge the photos in slide-show mode. 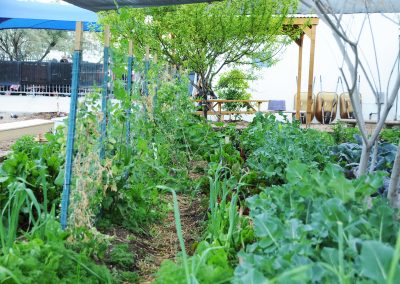 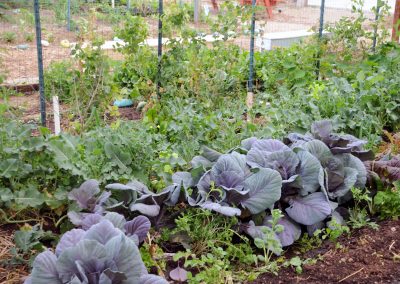 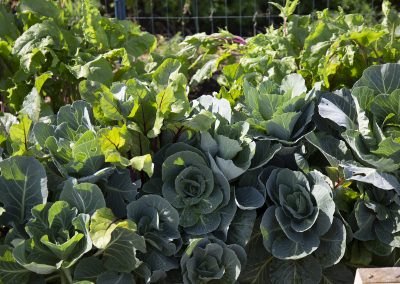 A riot of vegetables. 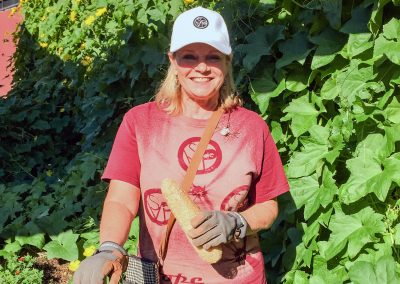 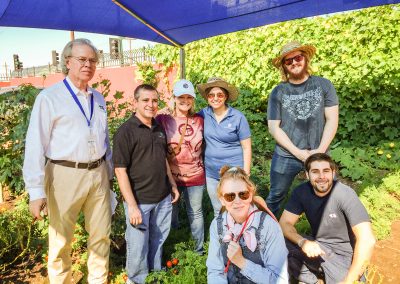 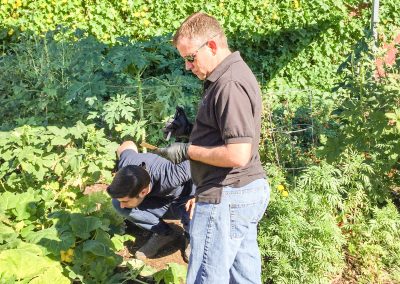 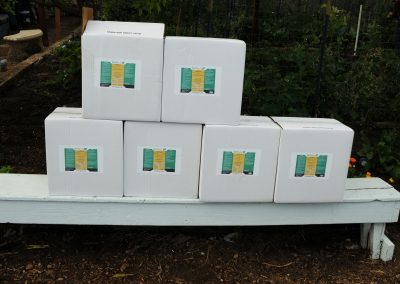 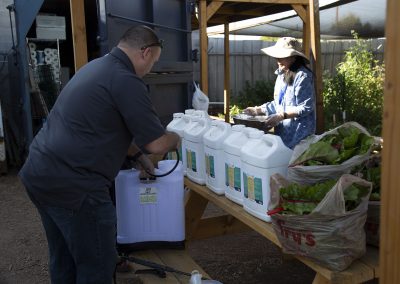 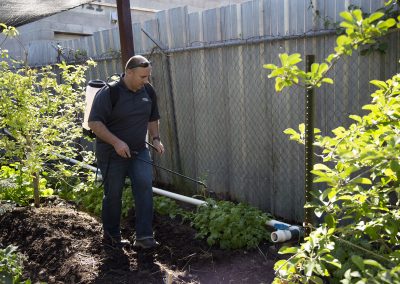 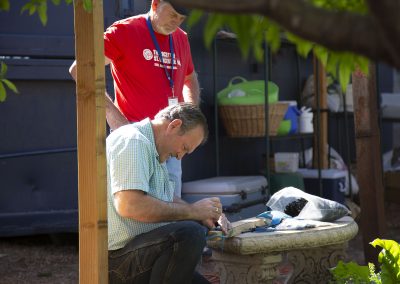 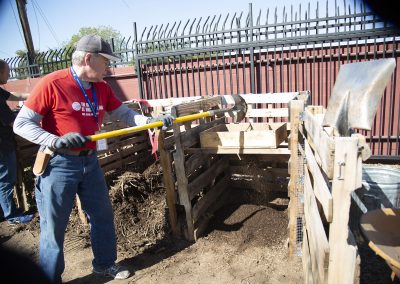 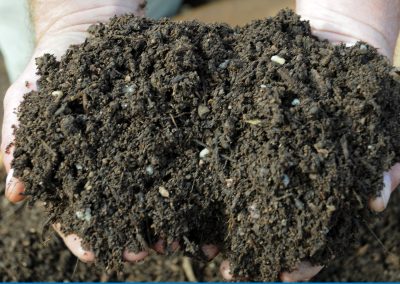 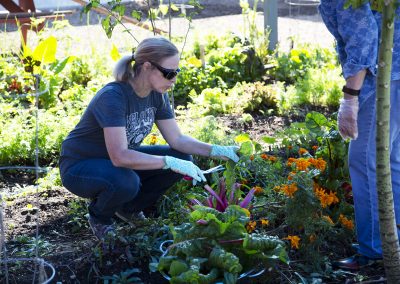 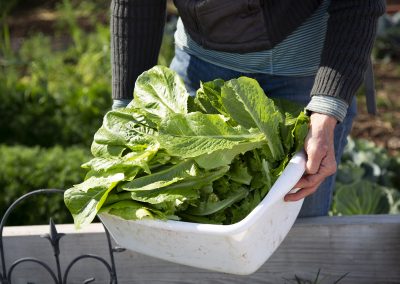 A few weeks later, the Coordinator mentioned that it would be really beneficial, someday, to have their soil and plant tissues scientifically tested to see how well their make-shift soil was doing in terms of making nutritious produce. “We have a solution for that,” I told her. Back at work, I asked Lyndon Smith if we could send some staff over from our Alpha Synectics Lab to do soil and plant tissue testing. “Sure,” Lyndon said, “Talk to Rita (Dr. Abi-Ghanem, Senior Director of Research and Development) and set it up.” The Lab staff came out and took the samples (see photos), analyzed the samples, and prepared reports. Not surprisingly, the “soil” (actually straight compost) was fairly alkaline (about 8.5 pH), common for Arizona, and was low in some essential mineral nutrients. Back to Lyndon: “Would it be possible to provide the Farm with some of our new Fertilgold® Organics fertilizers, since the Farm tries to be organic?” “Sure,” Lyndon said. “And talk to Justin (Smith, Senior Vice President of BHN Sales) about maybe having Eduardo (Sanchez, Senior Director of Latin American Sales who had been overseeing some of the Fertilgold® trials) put together a fertilizer program for them and teach them how to use the products.” Justin and Eduardo agreed without hesitation, and I soon delivered 6 cases of product to the Farm (see photos), with Eduardo coming out the next week and a few more weeks after to talk with the volunteer staff and teach them how to use the product—and also how to better deal with a few of their problem crops, including a banana tree that was not producing.

BHN encourages its employees to spend a certain amount of hours each year performing community service (during work hours), so when the Farm Coordinator mentioned that they were getting behind in some essential tasks, I was again able to tell her, “We have a solution for that.” Our Marketing Team signed up to spend a Thursday morning at the Farm applying fertilizer, working compost, and harvesting produce (see photos).

The Society of St. Vincent de Paul has a long history of finding solutions to help individuals deal with the stresses and tragedies of life, and BHN staff members are very pleased to contribute to those solutions. We also have a commitment to helping farmers solve their problems, and in this instance we’ve been able to provide a win-win-win solution (one of our core operating values) for everyone.

Have you had experience working with urban farms? We’d love to hear your stories.

And if you’d specifically like to help out St. Vincent de Paul with any of its many good works in the Greater Phoenix area, click here.