Microorganisms: The Living Engine of Soil—Part 2 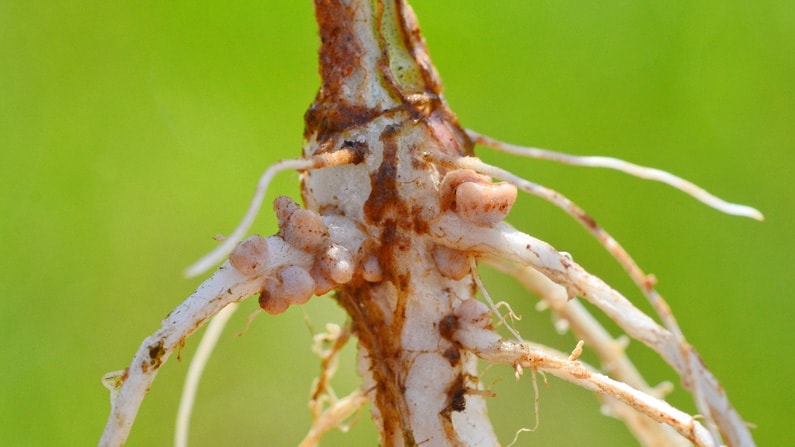 Good farmers farm crops, great farmers farm the soil. Important to having great soil is building an active and diverse microbiome that will structure the soil and move and process nutrients in ways most beneficial to plants. The more microbes there are in a soil, the more fertile that soil becomes. In this series, we discuss the many important roles that soil microorganisms play in producing fertile soil and healthy crops.

In Part 2 of this series, we look at Plant-Microbial Interactions.

In a 2013 Scientific American article1, the author commented that the work of farmers “ . . . is not a simple business of inputs and outputs—some water here, some pesticides there . . . it means waking up to what farming has always been—a collaboration with the vast community of microbes.” What did he mean by that? In the business of agriculture, understanding how the microbial community of a crop field (the “agribiome”) works and leveraging that understanding into practical application can sometimes mean the difference between success and failure, between profit and loss.

The first thing to understand about microbes is that there is a full-on competition taking place in the rhizosphere (the area around the roots) of most plants. Billions of microbes are competing for resources (food, water, space). As a result of this competition, microbes have evolved to benefit their host plants in a number of ways, including:

Nitrogen is known to be one of the most essential nutrients for plant growth. Let’s take the simple example of soybeans. Farmers have long known that alternating soybeans (and other legumes, such as alfalfa) with grass crops (corn, wheat) is very beneficial to the grass crops because planting legumes results in increasing essential nitrogen to the soil that the grasses are not able to produce. The legumes aren’t actually producing the nitrogen themselves—their root nodules provide a host for symbiotic nitrogen-fixing Rhizobium bacteria. It isn’t a simple relationship, though: the process involved is a fascinating collaborative interaction between the plants and the bacteria.

When legume plants find themselves in low-nitrogen conditions, they release something called flavonoids (a chemoattractant) into the soil through their roots. The flavonoids stimulate the bacteria to release a chemical that stimulates nodule formation in the plants. When the nodules begin to form, the rhizobia use an infection thread to penetrate the cell walls, which in turn triggers rapid cell formation at the nodule site. Once the bacteria have taken up residence in the nodule, the plant provides the bacteria with their required nutrients and energy (in the form of carbohydrates), while the bacteria take in dinitrogen (N2) from the air and convert it to ammonia that can be used by the plant—the same form as found in ammonium nitrate and ammonium sulfate fertilizers. This entire process is referred to as biological nitrogen fixation. Nitrogen fixation by legumes can be in the range of 25–75 lb. of nitrogen per acre per year in a natural ecosystem, and up to 250–500 lb. per acre in a cropping system. The primary mechanism for releasing the nitrogen from the legume nodules to the soil is through decomposition of dead legume plant material; additional soil microbes play an important role in helping this decomposition to occur.

Conditions that favor this complicated-yet-essential process include soils with a balanced pH and a variety of carbon and nitrogen compounds for the bacteria to feed on. Unfavorable conditions include soil acidity; high concentrations of aluminum and manganese; deficiencies in calcium, phosphorus, and molybdenum; temperature extremes; and poor soil physical conditions that restrict water supply and aeration. Maintaining adequate leaf exposure to sunlight in the legume plant is also a necessary component to the process.

This complex, symbiotic relationship provides plants with the nitrogen source they need, while the bacteria gain a protected “smart-house” environment in which they can conduct their nitrogen-producing business.

Phosphorus Production and the Underground Network

Microbes also play an important role in making phosphorus (P) available to plants. Some do this simply by promoting root growth. There are also bacteria and fungi (mycorrhizae—found among approximately 90% of all plants) that make P available through mineralization and solubilization of organic and fixed P.

But most fascinating are the extensive mycorrhizae networks that are known to connect individual plants together to transfer water, carbon, nutrients, defense compounds, and allelochemicals (toxic chemicals produced by plants to defend against herbivores or competing plants) from plant to plant. These networks can result in greater growth rates and survivorship of seedlings and improved inoculum availability for infection. A recent study suggests that these networks may be conduits for interplant signaling, influencing defense against insect herbivores and foliar necrotrophic fungi.2

As we can see, there is a constant dialogue, a give-and-take, going on between plants and the microbes in their rhizospheres. Growers need to be aware of this important symbiotic relationship and make sure that they are giving equal care to what can’t be seen (the microbes) as they give to what can be seen (the plants). Plants and microbes need each other, and neglecting one can be harmful to the other. Modern Farmer only slightly exaggerated in the title of its 2014 article, “Real Farmers Grow Soil, Not Crops.”3

In Part 1 of this article we discussed the importance of protecting beneficial microorganisms through balanced approaches to pest control, keeping soil well-drained and as salt-free as possible, engaging in practices that build soil organic matter, rotating crops in a manner designed to provide diverse organic matter to the soil, and providing ground covers that reduce soil exposure to sunlight. Also important to understand is that the single most limiting factor for healthy microbial growth, after adequate moisture, is the availability of organic carbon sources. Most soil microorganisms require carbon to build their bodies and to oxidize for energy. When planning nutrition for your crops, be sure to also plan the carbon-based nutrition required by the beneficial microbes in your crops’ rhizospheres. Meeting the nutritional needs of soil microbes is important for soil fertility and optimal crop yield.

Ask your Fertilgold® Organics sales representative about how we can help.

In Part 3 of this series, we’ll discuss Phytostimulation and Biocontrol in greater detail.

Read Part 3 of this series.